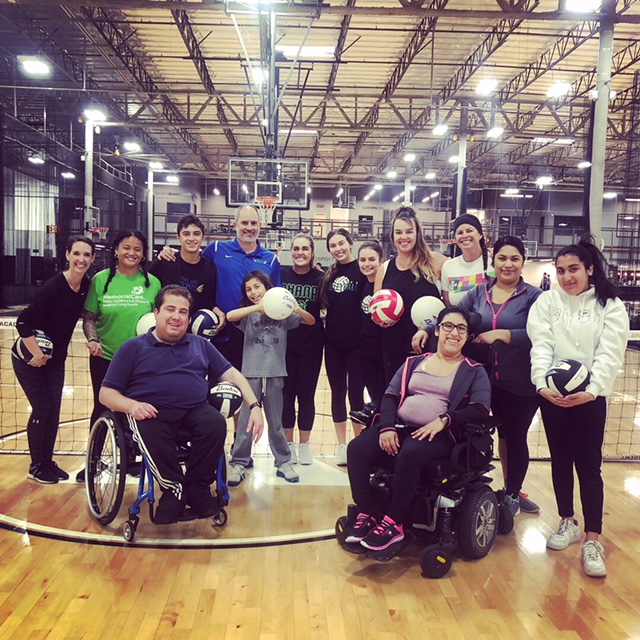 In early May 2018, Tess Feiler '19, Jade Leste '19, and Erin Brown '19 helped coach a sitting-volleyball clinic for Angel City Sports, an organization that offers adaptive sports opportunities for children, adults, and veterans with physical disabilities. It was the first sitting volleyball clinic ever held in Ventura County.

Former La Reina volleyball coach Elaine Donald runs development of Angel City Sports' sitting volleyball endeavors and has been with ACS since 2015. The clinic was hosted by Sports Academy and each participant had a physical disability that prevented him or her from playing the standing game.

The girls were busy, according to Coach Donald, who said, "They assisted me in all aspects of the clinic. The girls each worked one-on-one with a participant in over-hand passing (setting) and forearm passing. They assisted me in drills, demo-ing how to execute the drill, then actively playing in the drill. They helped participants learn how to serve the ball underhand and overhand. They learned everything I could teach them about the differences in the standing game and the sitting game. They were exposed to new rules, and gained a unique perspective on the game and an appreciation for these amazing disabled athletes. We had a lot of laughs and a few special moments with participants that they’ll probably remember for a lifetime."

After coaching Team Navy/Coast Guard's Sitting Volleyball at the 2011 Warrior Games, Donald became hooked on the sport, which is a Paralympic Games sport in which Team USA is the reigning Gold Medal holders. She has coordinated the last three Olympic Day Festivals for the LA84 Foundation at the Rose Bowl, exposing inner-city youth to the game, as well as several sitting volleyball clinics around the LA area.

The clinic in May was part of ACS' movement towards developing an adaptive sports league for adaptive athletes in Ventura County. The group is currently in talks with Sports Academy to bring this into fruition.

Donald spoke glowingly of the work done by the Tess, Jade, and Erin.

"I wanted to acknowledge them for their compassion and professionalism while working with the adaptive athletes. Erin, Tess, and Jade represented La Reina with dignity and kindness. I felt like the whole La Reina community and their parents should be privy to their exemplary performances. From my time spent at the school, I am familiar with the caliber of young woman who have come through your doors and I thought you should know that Erin, Tess, and Jade are quality examples of what your student body should be."

Previous La Reina students who have worked at clinics alongside Donald are Carolena Huseby '15, Sydney Haykel '17, and Erin Schrang '17.

To learn more about the annual Angel City Games, coming up in June at UCLA, including how to compete, volunteer, or be a spectator, visit their website.